On Tuesday, December 3, I had four piles of different kinds of blocks, two eager students willing to play with said blocks, and a queen-size bed that almost accommodated the layout for the throw-sized quilt. 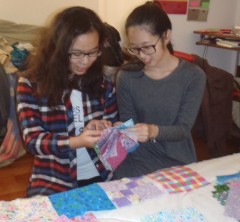 While I could have done the arranging of the blocks myself, Belle and Hebbe have been coming over on Tuesday afternoons for several weeks to work on their own projects and to peek into my quilting process. They are both interested in commercial design as well as a variety of arts and crafts. Hebbe has also designed and made some of her own clothes by hand, and she may take on a new garment project next semester, using my machine. They have been intrigued about the quilting process and wanted to participate. This seemed the perfect way to include them. So on Tuesday, December 3rd, they arrived ready to “play” with the blocks and see what kind of design they could come up with. A queen-sized bed was their canvas, and 120 quilt blocks made up their palette.

Numbers 1 and 2 were the prevailing rules, and numbers 3 and 4 were more like general guidelines. The process included a lot of placing, moving things around, moving other things around, and then discovering that something else needed to be moved around. OK, there might have been a little frustration here and there. It was like a giant jigsaw puzzle. It looks like fun, but it has moments when you’re not sure if you can find the piece that fits into a specific spot. But they kept at it (with a little friendly advice from me. (Although it may have seemed like interference or, worse, making up the rules as we went along. OK, that may not be far from the truth.) Still, they persevered, and the results were worth the struggles, as you can see below.

I’m very happy with the results. Of course, this will shrink significantly when I sew all the blocks together with the 1/4″ seams, but it will be a nice size for curling up on the couch.

Of course, there is still much to be done. Sewing the blocks together to complete the top. Assembling a backing for the quilt. Basting the three layers (front, batting, and backing) together. Doing the machine quilting. Making the binding, and then putting said binding on the quilt. Still, considering that this quilt was only a distant dream as of October 1, to have the quilt top almost assembled is northing short of amazing. I’m thrilled to be this far. I will post another update when I get the top assembled.