One of the hardest things above living overseas is missing my family and friends.

I feel fortunate that I can visit the US every summer and that Skype lets me see and talk to people almost as if I’m in the same room with them. While we all take this separation in stride, there are times when I really wish it were possible to physically be with the people I love more often than just during two months in the summer. On the bright side, at least my husband is with me now. The first two years that I was in Taiwan, he was still in the US. It’s great to be together again.

One of the most awesome things about living overseas is making friends who become a family in your new home.

As with any situation, living abroad has its share of ups and downs. Sometimes, I love what I’m doing here, and other times I feel frustrated and worn out. But there is a constant throughout my four plus years year–and that is the group of students who remind me in hundreds of ways why I came here in the first place. I will be sharing some student stories in future blog posts, but today I wanted to share something that happened earlier in the week.

Last Saturday was Teachers’ Day (the birthday of Confucius). On Monday morning, I walked into my cubicle in our research room and found a gift bag on my desk. Inside it was this box. Along with a note:

This is a gift from Macaca, your student who graduated from the department of biotechnology two years ago. She asked me to bring you this sweet gift and wish you a good Teachers’ Day.

Inside are some of the most beautiful chocolates I have ever seen in my life. This picture doesn’t do them justice! They are almost too pretty to eat!  I said ALMOST! So far, I’m still admiring them, but that won’t last forever. Look at these gorgeous beauties! 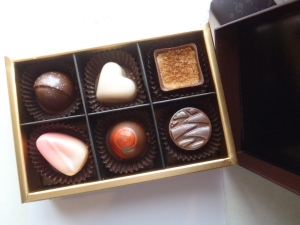 The most amazing part of this story is that Macaca, the student who sent these, was my student the very first year I was a teacher here. I haven’t been her teacher for three years, and yet she still remembers me on Teachers’ Day. I was so touched by her kind gesture.

Many other students have moved me over the years, and I plan to share some of their stories. My point is that the connections that I continue to build here sustain me in those moments where I long to be in my home country. But these students share their country with me and help me make it my home while I am with them.

A Birthday Tribute to My Husband

It’s more accurate to call this a belated birthday tribute to my husband. Today is Sunday, and tomorrow it will be one week since his actual birthday. Luckily, we have a way of turning events into movable feasts when the situation calls for it, as it does this year. Today, I am in Taiwan and Dave is in the US (in Iowa) with his mother and sister. He is there to help with his sister’s upcoming surgery and recovery. And while we both feel it is important for him to be there, we both find it difficult to be apart.

More than one person has told me I have the best husband in the world. My response is usually to tell them that it’s because he has the best wife in the world! They usually agree, but I think they’re only humoring me. The accompanying eye-roll is a dead giveaway.

Truth be told, he is pretty wonderful. He makes my life easier in so many ways. When he joined me in Taiwan two years ago, we decided that he would not get a job in one of the local cram schools; instead, he would take over the household chores and assist me in my work tasks, so that I could do additional writing and editing work.Of course, Dave, being Dave, goes beyond the basics. In addition to the cooking, dishes, laundry, shopping, and cleaning, he does so many extras. He keeps the water bottle on my nightstand filled; he sets out my pills in one of those organizers; and he even makes coffee for me every day. This last one is particularly significant in light of the fact that he doesn’t even drink the stuff.

When it comes to my job, he goes to classes with me, gets the copying done, and provides coffee and other refreshments as  desired. Sometimes, he gets to the classroom ahead of me and signs me in to the computer and our online system so that I can just come into the classroom and hit the ground running.

He has gotten to know our neighborhood pretty well. In addition to the grocery shopping, he does the monthly trek to the bank to wire money to the US. He walks me to the coffee shop when I go for a work session there, arranging a pick-up time to come and retrieve me. Sometimes, he checks out stores in the area and arranges to arrive at our pre-determined pick-up time.He accompanies me on crazy adventures when the opportunities arise, even if we’re not sure where we’re going. He even goes to the fabric district in Taipei with me.

No tribute to Dave would be complete without mentioning his amazing ability to comb thrift stores for treasures. The downside is that sometimes we get inundated with stuff. But there are some amazing treasures and it is clear that he pays attention to the people in his life. He’s great at finding treasures on e-Bay as well.

Interestingly, he is the first person in my life for whom I have difficulty finding gifts.I am a person who makes gifts for others and who enjoys surprising people with all kinds of gifts. It’s fun to figure out what might delight and surprise friends and family. But when it comes to Dave, I’m often baffled. Maybe it’s because he scouts out the things he wants for himself at the same time he’s scouting for others. I don’t know the holes in his collections and hobbies. When we’re separated (like now), I find this gifting thing even more difficult. So when I do come up with an idea, I get a little more excited about it than is probably warranted. But I take my thrills where I can get them.

Right from the beginning, Dave has been one of my blog’s biggest supporters, even though he didn’t totally understand its importance to me when I first started. He thought he was being helpful when he suggested that I not put pressure on myself to publish on a schedule. He didn’t understand at first that the blog was important to me because it filled a need I had to do something for me. Since I had given up my quilting for a while, the blog has given me a creative outlet that can’t be expressed in fabric right now. When I explained this to Dave, he listened, and from that point, he’s never suggested putting off the blog again. He puts up with my late nights when I’m trying to publish before the clock strikes 12. He helps me with motivation tactics and good humor. He believes in me. After my unintended two-week break from the blog, he was supportive as I tried to get back on track.

So it seemed only fitting that I would use the blog to surprise him for his birthday, even if I am a little late.

And in case you think that he’s perfect, I will spill on his one flaw. Sometimes, he drives me crazy when he tries to be Mr. Fix-It Guy, and I just need an ear so I can vent. It can be sweet and irritating simultaneously as he tries to offer suggestions for making everything better again. But he’s gotten better at picking up the signals when I just need him to listen to me, and he can squelch the suggestions–at least most of the time. But when I DO need Mr. Fix-It Man, he’s right there!

Sometimes I wonder why he is so taken with me. When I’m stressed, I feel like I’m not a lot of fun to be with. And sometimes, it seems like I’m stressed A LOT! But he is patient, gentle, and caring. He makes it clear in hundreds of ways, large and small that he wouldn’t want to be anywhere else.

During this separation, Facebook chat and Skype conversations keep us going. Memories we’ve created together, and hopes we have for the future keep us strong through the challenges of this time apart. But when all is said and done, I have total confidence in him and his love for me. And I am grateful for another year to show him how much I appreciate him.